I only went out for a walk, and finally concluded to stay out till sundown, for going out, I found, was really going in.
–John Muir 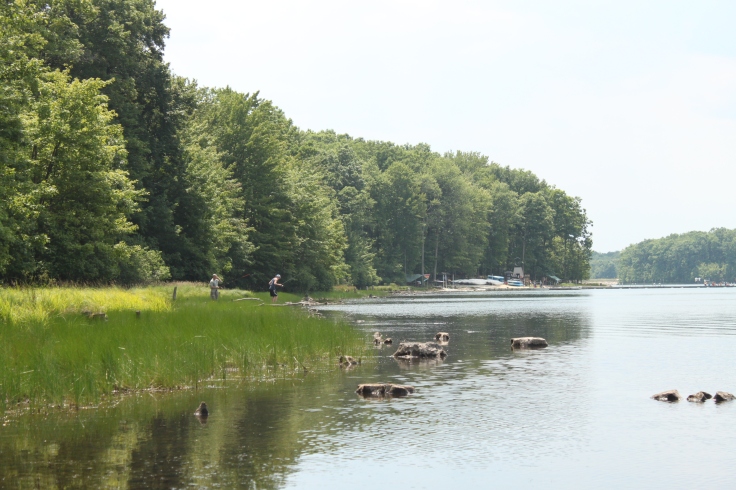 As a youth I had a dream of becoming an astronaut.  I even made a T-shirt with the space shuttle on it using acrylic paint–I wanted to be the first man on Mars.  I grew up more in high school and thought that I wanted to be a Jack Kerouac or a Christopher McCandless.  I suppose my thirst for exploration and adventure was never satisfied with the four walls of a classroom and winter was never my favorite season anyway.  I guess it would have to be summer–even though I say I like spring or fall because of the beautiful color in flowers or leaves.  Summer is camping season.  The air is fresh, the sun is warm, and everything is green.

I worked at a boy scout camp every summer relishing the ephemeral parent-less freedom that I had.  I could do whatever.  Most of my time was spent working, of course, but that was fun also.  I taught merit badges about nature, ornithology, insect study, herpetology, environmental science, forestry, astronomy, fishing, mammal study, and fish and wildlife management.  I became proficient in these fields through time, but not all at once.  My first real love was with reptiles and amphibians.

I was a master snake-catcher.  I caught a lot of other herps (the collective name for reptiles and amphibians) and cared for some as pets, but I loved the thrill of catching snakes.  I caught brown water snakes and garter snakes with quick tempers and nasty bites and the impressive six foot-long black rat snakes–a spectacle sure to gather an audience.  I can still catch a snake with my bare hands, but unless the snake is in danger I choose not to anymore.  I learned a lot about herps and a bit about mammals, fish, plants, trees, and birds.

At the age of eighteen I was hired as the camp’s Ecology Conservation Area Director.  That summer, I purchased a Canon point and shoot camera with my first paycheck.  I took photos of all sorts of things, like scenery, but the camera became a tool for learning about another group of animals–birds.  Through photography I could identify species despite their evasive maneuvers and catalog what I saw.  I became a birder by sight and to this day I have a very basic ability to identify birds by their call alone, though I do try.  I learned to identify some birds solely by their movements, like the way a woodpecker undulates in long flights or a flycatcher sallies out from a high perch to catch an insect.  I kept on birding through the winter, keeping an eye on bird feeders in the yard and participating in Project FeederWatch.  All the while, I would take photos–eventually graduating to a Canon digital SLR.  (I also have a game camera, which I use as a camera trap for more secretive wildlife.  It has been very exciting seeing what might visit and learning about animals in any given area.)

I eventually left the cold Northeast for the warm Florida Keys.  I worked as a maintenance “ranger” for a conference center and explored the islands in my free time.  The birding in the subtropics is excellent year-round and I discovered a world of warblers amid mangrove swamps.  I also became a reader.  Before then, I learned from field guides–I liked the pictures and the short but informative explanations weren’t at all daunting.  However, there is a world of knowledge about nature in literature.  Now I enjoy reading far more than I like to admit.  Many lingering questions about the intricacies of ecosystems and more general questions about natural history have been answered for me in books.

My adventures in Florida ended after five months and I embarked on a road trip with two new friends, Megan and Elmer, across the country to the Pacific Northwest.  For two weeks we hopped from one National Park to the next, spending a night here and there under the stars.  This was my grand adventure.  We saw armadillo-filled beaches, survivalist plants on arid soil, dense forests at the base of mountains, canyons and sculptures cut away by water, and magnificent wildflowers growing in high prairies.  We drove five thousand miles in all and visited numerous parks, cities, and small towns along the way, with our final destination in the valley just outside of Spokane.

That summer, I immersed myself in the ecosystem of the Idaho Rockies while teaching nature at a boy scout camp.  I quickly learned the names of the plants and trees–mostly coniferous spruce, pine, fir, and cedar but some deciduous–all but a few completely new to me.  The birds, herps, and mammals I recognized from field guides, new insects appeared everyday for me to identify, and a world of lichen dangling from branches entranced me.  I was particularly stricken by plants and trees–even more specifically by conifers. (After the summer, I would complete the coast to coast trip with a visit to Seattle, the nearby Olympic Peninsula, Hoh Rainforest, and Mount Rainier.  I recommend visiting Seattle and the surrounding area as it is a fine example of how you can be only a few miles from a city, but in an entirely different world.)

I returned home to the Northeast feeling enlightened, not only about the cross country adventure, but also about the wonders of life everywhere.  Every living thing has its own universe of wonder about it from the ponderosa pine to an alpine lupine, a fierce and elusive mountain lion to a docile and common chipmunk, or a tropical mangrove swamp to a temperate rainforest.  I continue to learn about nature everyday, whether through reading a book, observing living things, or simply wondering about the wilderness.  And I am increasingly impressed by all forms of life and the interactions that we share.  In my journey of becoming a naturalist–which I consider unfinished as there is still much for me to know and discover–I have had adventures, made discoveries about life, and found out a great deal about who I am.